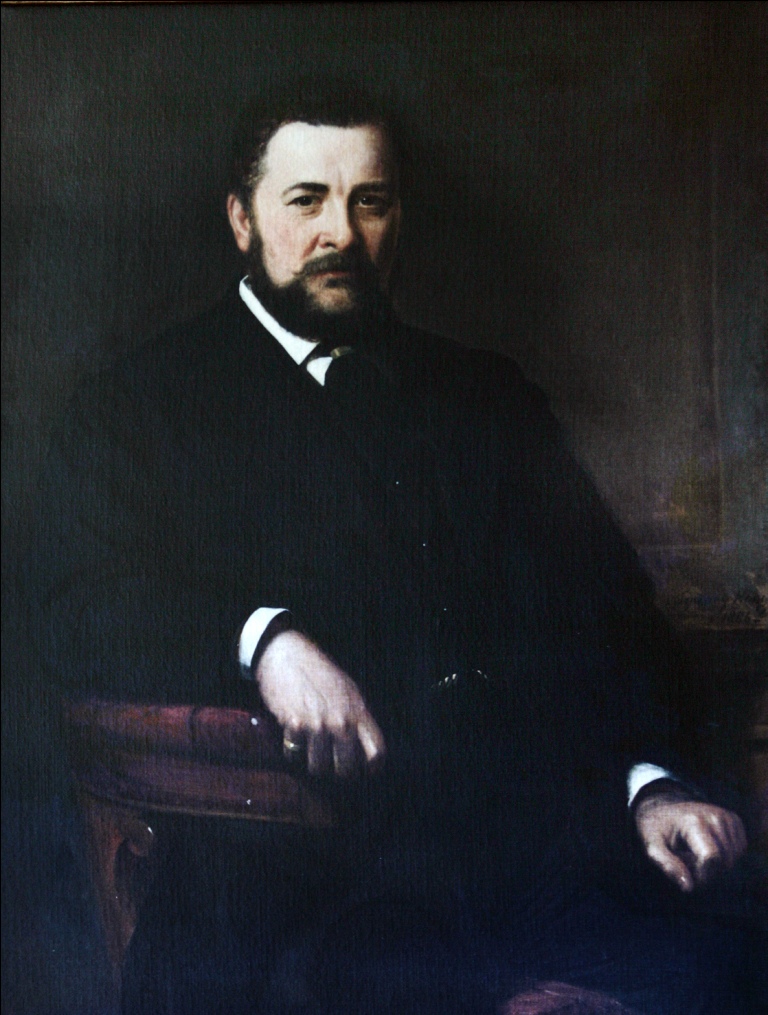 Robert Charles Halpin, Master Mariner, born February 16, 1836 at the Bridge Tavern Wicklow, Ireland – January 20, 1894 and died at Tinakilly, Wicklow. He captained the Brunel-designed leviathan SS Great Eastern which laid transoceanic telegraph cables in the late 19th century. He was, arguably, one of the most important mariners in the 19th century. He helped make the world a global village by connecting empires and continents via submarine telegraph cables – in effect constructing the Victorian age communication network.

He was the son of James and Anne Halpin (née Halbert), the youngest of 13 children. His father, James, was the proprietor of a small tavern (built 1702) and the family were reasonably well off. From an early age Robert showed a fondness for the sea. He received his early education at a private school nearby at Leitrim Place, possibly that of Ellen White, The Murrough, recorded by Slaters Directory, 1846. Halpin appears to have shown little interest in formal education and with his imagination fuelled by tales of faraway lands recounted by mariners in his father’s tavern, he left home at age 10 to become a seafarer.

It was then Halpin began his association with the steam ship the Great Eastern. In his book “The Great Iron Ship”, author James Dugan states, “the first and in some ways the most interesting of the ocean liners was the Great Eastern, brainchild of the legendary Isambard Kingdom Brunel.”
The following extract is taken from biographical notes on William Thomson, Lord Kelvin:

“Thomson was actually aboard the Great Eastern, the ship which laid the cable. The first officer and key navigator was another Irishman, Robert Halpin from Wicklow Town. Halpin was soon appointed captain of the ship, and went on to earn further distinction for cable laying, earning the nickname “Mr Cable”.”

Launched at the Isle of Dogs, Kent, January 31, 1858, she was 693 feet in length (over 200 metres) 22,500 tons dead weight and had passenger accommodation for over 3000 passengers. Five times larger than any other ship then built, she had six masts named Monday, Tuesday, Wednesday etc…, five funnels, 6500 yards of sail, two 58 ft paddle wheels, a 24 ft screw (which remains the biggest ever built) and a coal carrying capacity of 15000 tons.
The Great Eastern had a career dogged by misfortune. The Great Eastern was made ready for her maiden voyage to the United States. She was designed for the longer Britain to Australia run and proved uneconomical on the shorter Atlantic routes. She left Southampton, June 16, 1860, with 418 crew but only 35 paying passengers including one carrying an English fighting cock and three hens in wicker cages for a chicken fighter in California.

On June 28, the ship docked successfully completing her maiden voyage. Never filled to capacity and losing money, the vessel was sold from company to company and in 1867 was chartered by a French syndicate to bring American visitors to the Paris World Exhibition. She attracted only 191 passengers including Jules Verne who later wrote a book about her called “A Floating City”.

Located by the River Vartry and only a quick walk to the sea front, Halpin’s Bridge Café opened in 2009 by Robert Doyle and was taken over in 2018 by local’s Steven and Eilish Rawson. Along with their four daughters, this family run business offers a warm welcoming atmosphere with indoor and outdoor dining, as well as offering a takeaway service.

From offering classics like Halpin’s famous all day breakfast to new creations, like their speciality coffees and gourmet hot chocolates, this cafe has something for everyone.

We serve local delicacies such as all-day breakfast, wraps, sandwiches and much more.